With bike races canceled, there’s a way to compete

BEND — As more and more people seek to escape the coronavirus pandemic by recreating outdoors, cycling has surged in popularity.

But bike racing has not, as most events in Oregon have been canceled or postponed this summer.

To help fill that void, the Oregon Bicycle Racing Association is giving cyclists a chance to reach some goals by staging monthly contests through Ride with GPS, a bike route planner and cycling navigation app.

For August, the challenge is to ride the most classic OBRA race courses from the past or log the most miles on those courses. The contest includes road, mountain bike and gravel routes.

“I thought it would be kinda fun,” said OBRA Director Chuck Kenlan, who lives in Bend. “The one thing we’re trying to do is engage our members. Everybody’s riding bikes. There’s a lot of pent-up fitness out there, and a lot of people are riding. We got some good sponsors and we can throw together some good prizes for folks.”

Last month OBRA held the Wy’East-ing Challenge, in which cyclists had to climb the equivalent of the elevation of Mount Hood — 11,250 feet — in one ride.

“It was amazing to see what some of these athletes in OBRA can do,” Kenlan said. “It’s impressive.”

For this month’s contest, nearly 300 riders have joined the Ride with GPS OBRA account. The contest includes about 50 different routes throughout the state. Some are ongoing races that have been happening each year, minus this year, but for the most part, they are routes that have not been used in a while for races.

Some of the routes include former race courses, including the High Desert Omnium and Bend Don’t Brake races. There are also courses from past Cascade Cycling Classic stages, including the Mount Bachelor Road Race, the Awbrey Butte Circuit Race and the McKenzie Pass Road Race.

Kenlan even added the traditional Downtown Twilight Criterium course, which is less than a mile along streets in downtown Bend.

“In case people want to go ride seven-tenths of a mile in a rectangle,” Kenlan said. “They can check that off as one course.”

The 2005 OBRA Road Race Championships course is also one of the routes, which include roads near Madras and Gateway.

“This will give folks a chance to see some of these former races that used to be held,” Kenlan said.

The OBRA director added that these contests are unique, and also cater to a broader set of riders, because they are not based on time.

“It’s just putting in the miles,” Kenlan said. “Do as many courses and put in the miles. We don’t care how fast you did them. It also makes people who maybe aren’t necessarily fast or competitive ... it gives them an opportunity to be competitive.”

“He had to drive to get to a lot of them,” Kenlan said. “People were commenting on his Strava page. He thinks he’ll get 20 to 30 done by the end of the month. He’s highly motivated to get out there and do these.”

Kenlan said he is expecting many more entries this week after cyclists post their rides from over the weekend.

He added that OBRA is working on a cyclocross contest for the fall.

“It’s fun for us,” Kenlan said. “It keeps me and the (OBRA) staff that we still have engaged with our members.

“And it’s good that people are out there riding bikes.” 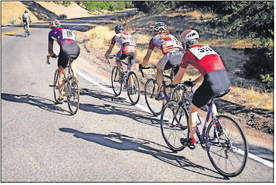 Bicyclists compete in a past edition of the Mt. Ashland Hill Climb Bike Race. With bike races canceled due to the pandemic, the Oregon Bicycle Racing Association is helping riders stay sharp with virtual events.

Click here to see this page in the eEdition: